The cast bronze sculpture was commissioned specially for the Appalachian State University’s permanent collection by the Clabough Foundation.

“Sweet Solitude” depicts a young woman, sitting on the existing serpentine brick wall in the garden, with one leg dangling, playing the flute.  The Turchin Center’s Kay Borkowski Sculpture Garden is home to the sculpture.  Ronny Walker, the artist, chose the flutist theme in honor of Kay Borkowski, herself a flutist.

The sculpture was installed in August 2004 and the official dedication ceremony was held in the Turchin Center Sculpture Garden at the end of the same month. 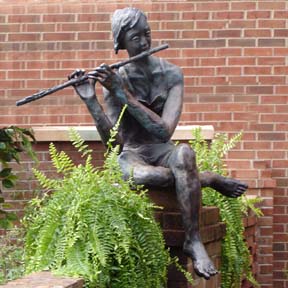